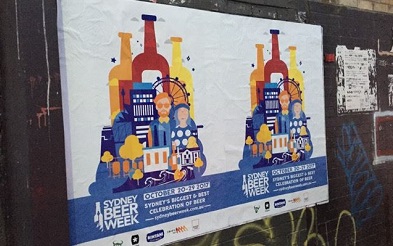 The program for Sydney Beer Week will launch tomorrow on International Beer Day Friday 4 August and the festival promises to be bigger than ever.

Ahead of the program launch, Beer & Brewer caught up with Sydney Beer Week General Manager Liam Pereira to find out what some of the highlights will be this year.

“For us, we’re not rebuilding what’s not broken, but just making it bigger and better,” said Pereira.

“The thinking behind dropping the ‘craft’ out of the name was just making it a bit more accessible and make it a beer festival for everyone.”

Running from 20-29 October Sydney Beer Week is extending its reach to more of Sydney this year.

The flagship events of Sydney Beer Week 2017 will include an opening gala tasting event, the Sydney Beer Awards, the Hair of the Dog breakfast and the new Food Truck Corral. A Festival Hub will also be established as homebase with Sydney Beer Week staff on hand to advise visitors on festival events, over a cold beer of course. Festival events will be arranged into five streams – Food, Education, Activities, Technology and Showcase.

“The big event is the Opening Gala that we’re doing at the Maritime Museum on Friday 20 October,” Pereira told Beer & Brewer.

“We’re looking at about 35 different breweries and about 1000 person capacity out on the foreshore of the Maritime Museum, so that’s going to be a massive event and is going to be awesome.”

Other events to look out for are the Stockade barrel program being held at Mjølner, Bridge Road’s Bicycle and Beer events, and Balter Brewing’s Tins of Glory.

“Balter is doing their Tins of Glory, which is a beer can shuffle board event. This is going to be the start of an Australia-wide tour with the first stop being in Sydney for Sydney Beer Week,” said Periera.

“There is a really good mixture of free events to get along to as well as a lot of week-long events,” said Pereira. All of which can be seen on the Sydney Beer Week website from tomorrow 4 August, which is also International Beer Day.