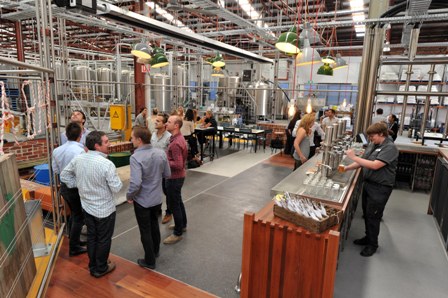 The industrial interior has dispensed with fanfare and such wimpy things as walls, with beer enthusiasts set to enjoy their pints while seated mere metres from the brewers and their equipment and separated only by some industrial-chic cyclone-style fencing. It’s an interesting step forward in the development of brewery bars and the Beer & Brewer team are looking forward to enjoying a few old favourites in the concrete-floored and wooden-benched bar, while observing the brewers toiling away.

Along with their usual stable of quality brews, there will also be some experimental beers on tap as well as the promise of some unfermented classics straight from the tanks. “The best bit is the three taps that run from the tanks,” says Scott Vincent. “The liquid pouring from them will be unfiltered, unpasteurised brews, something a bit special. Nothing tastes better than beer straight from a tank.”

Serving up food as well as drinks, the menu has been promised to be “simple yet delicious” with marinated olives, dips and top-notch cheeses to tempt visitors.

And the team, according to Vincent, are pretty chuffed with their handy work. “The whole team has been putting in long hours,” he says. ”We’ve tested all the taps, tasted the entire menu, and sat in every stool. It’s been thirsty work.”

There will also be brewery tours for those interested in seeing how the new digs – an old Cadbury factor – are coming along since the team moved to Port Melbourne from their previous home in Dandenong.