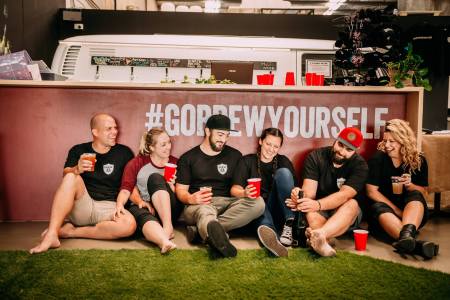 A new brewing facility has opened in Perth, updating the traditional ‘brew it yourself’ business model with a flavour-driven, craft approach – and throwing in a microbrewery for good measure.

Brew U (AKA Brew University) is the brainchild of a group of three couples: Richard and Lisa Allen, Jon Stockey and Jenna Lippert, and Eliza Stockey and John Lewis. The latter told Beer & Brewer that they’ve essentially taken an old brew-on-premises facility and “themed it along the lines of what you’d see at a microbrewery over in the US.”

“The traditional brew-on-premise model has been around for a long time, and it’s pretty well established – but it tends to be targeted at not so much the avid homebrewer or beer enthusiast, but guys who just want to have keg beer on tap, and to brew some cheap alcohol that they can consume at home,” Lewis said.

“They’ve also tended to be fairly basic setups – which is great and they’re a successful model – but we wanted to try and bring a bit more of the craft element and the current brewing trends and offer something a step above the standard extract brewing that they do [at a brew on premise facility].

“Aside from just your general extract brewing we’re doing some more interesting stuff with yeast starters rather than just your standard two strains of dried yeast that make 300 recipes that are all very similar!

“There’s a scalable element too – so from the 50-litre extract brews through to grain brewing, playing with yeast, customizing menus… we’ve got a smaller 300-litre commercial system, and we’re looking at putting in a 2-to-3000-litre as well, so guys can have a play with one size all the way through to our production facility when it goes in.”

Looking ahead, the team at Brew U will also enlist the help of local mates in the brewing industry to host classes and seminars for those who are more serious about their beer.

“We’re pretty fortunate that two of the lads – the other Jon and also Richie – are both really, really strong brewers, they’ve been brewing for a long time and really immersed themselves in the homebrew community, and have some great friends in the industry,” Lewis explains.

“So we’ll also be bringing in some local brewers to do some classes and seasonal brews, and some kettle sours or beers that might be trending at the time in the industry, so that the guys that follow the trends and may not be able to replicate it with their setup at home can come in, learn about and brew some different varieties of beer.”

Lewis also details plans to release packaged beers and a number of other alcoholic and non-alcoholic products (like Kombucha) under the Brew U label – a plan that’s slated for late in the year.

“What we really want to do is move beyond just brewing cheap alcohol for people to drink at home, and actually provide a link all the way through as far as people want to go in brewing.”