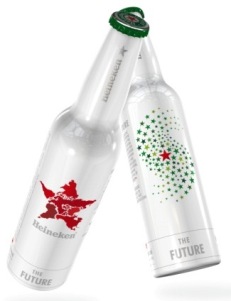 The Heineken Limited Edition Design Challenge revealed its winners earlier this month with the honours going to freelance designer Lee Dunford of Sydney, Australia and design student Rodolfo Kusulas of Monterrey, Mexico. The two strangers paired up through social media to take out the global Facebook challenge which received more than 30 000 entries from 100 countries.

The design brief asked entrants to create a design that symbolised how people would connect in the next 140 years and pair it with another through the online gallery. Designers then connected with each other to enter the competition together.

With the field whittled down to just six finalists, the winning duo’s star-oriented design captured the judges’ imagination. Evan Orensten of Cool Hunting – one of the judging panel – was a particular fan. “I really liked this bottle. It’s striking if you glance at it, but if you take the time to really look at it and see what’s going on it’s a really considered and impressive design.” Mark van Iterson of Heineken was also very impressed by the duo. “Lee and Rodolfo have created a premium visual concept that summarises how our world communicates through time.”

The design will appear on an exclusive Heineken bottle around the world from December 2012.