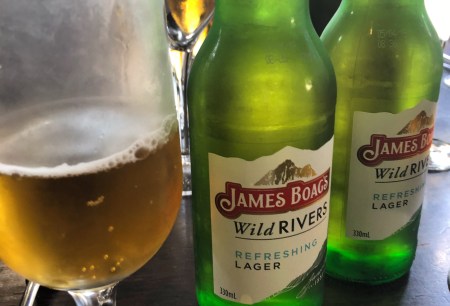 The beer is inspired by Tasmania’s rugged natural environment and its wild rivers, which the brand says “evoke images of purity and refreshment.”

Wild Rivers – described as a modern take on an Australian premium lager – was developed by the team at the James Boag Brewery in Launceston.

“We’re proud of this beautifully balanced yet subtly complex lager,” said brewer Nathan Groves. “We feel it reflects all that is unique about Tasmania, with its fresh aroma reminiscent of our crisp air and beautiful bushlands.

“As a brewer, this was an extraordinary challenge and fantastic one-time opportunity. It was important for us to respect the brand’s rich history and keep its integrity intact, while creating something new that everyone could enjoy.”

“James Boag’s Wild Rivers is proudly and exclusively brewed at James Boag Brewery in Launceston and we believe it is going to strike a real chord with those who want something modern, refreshing and crisp to drink,” Brindley said.

To promote the beer, Tourism Tasmania has again partnered with James Boag on the campaign and launch of Wild Rivers.

“James Boag is a brand that tells a very Tasmanian story and aligns strongly with our tourism brand,” said John Fitzgerald, CEO of Tourism Tasmania. “Discovering Tasmania’s curious character and the rugged beauty of the State’s landscape reflects the essence of James Boag as well as capturing elements of Tasmania’s appeal.”

James Boag’s Wild Rivers will be available at Dan Murphy’s and BWS, as well as a range of independent stores nationwide, from 17 September.