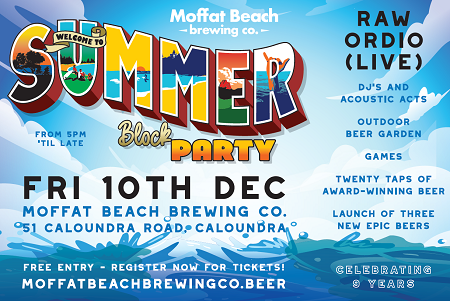 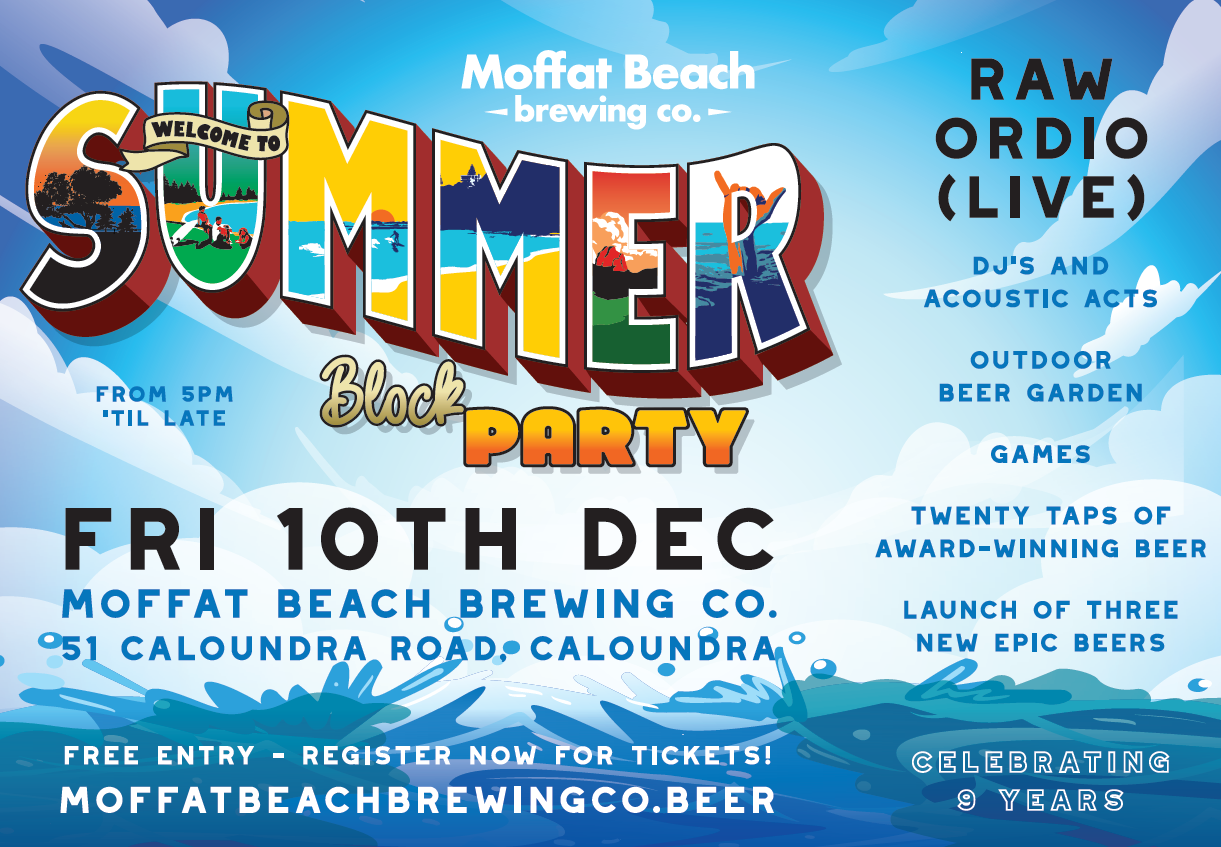 Featuring a headline set by RAW ORDIO, one of the most exciting electronic party acts on the Sunshine Coast, supported by some of Moffat Beach’s favourite acoustic acts and DJs, the event will also see the release of three new beers from the popular brewery.

These include COLD CRASH COLD IPA, a new style of beer brewed with light malts and lager yeast to put the beer’s intense hop flavours on show. After winning beer drinkers over with a small taproom-only release last month, the flavourful beer has been scaled up and will be released in cans for the first time, with Head Brewer Matt Wilson calling it his “beer of the summer”.

Their second new beer – POP TOP JUICY PALE – uses a powerful new hop blend created by cryogenically freezing hop cones, extracting all the hoppy goodness, and then loading it up into this beer to deliver massive peach, juicy pineapple, grapefruit, and daiquiri-like aromas. It will be available on tap and in cans for the first time at this event.

And finally, Moffat Beach Brewing Co are releasing their take on Belgian beer with their COOL BREEZE SAISON. This traditional style is the original working man’s beer, brewed to keep Belgian farmhands hydrated as they harvested the fields. Supremely thirst quenching, the style is highly carbonated, tart, dry and mildly sour from the yeast strain. Try stopping at one.

Along with the new beers, Moffat Beach will be serving up to 20 of their most popular beers, including Moff’s Summer Ale, Passenger Pale Ale, and Trilogy Best Coast IPA, brewed just metres away and about as fresh as you can get.

Neighbouring distillery Beachtree will also be involved with the BEACHTREE GIN BAR serving G&Ts and a cocktail or two in the beer garden, where you can also enjoy live musicians, cornhole, giant jenga and more. And keeping you well fed are the legends behind KING OF THE WINGS, one of the most popular food trucks in South East Queensland.

It’s going to be a massive night, and a bit of a ‘coming of age’ for this small brewery, which until recently has been brewing just enough beer to serve over their own bar. But now armed with a number of national awards recognising the quality of their beer, Moffat Beach Brewing Co is excited to be getting its tasty products into cans, and into the fridges of all good bottle shops along the Coast and further afield. And we reckon that’s worth a toast or two!

Entry is free but tickets must be registered at www.moffatbeachbrewingco.beer.