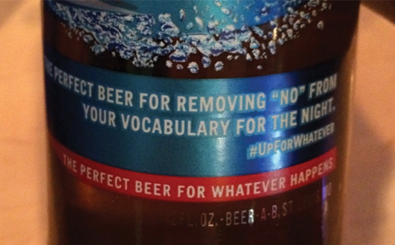 Bud Light has apologised for an advertising campaign accused of encouraging rape culture with the slogan: ‘The perfect beer for removing “No” from your vocabulary for the night’.

The slogan was one of several that America’s largest brewer, Anheuser-Busch printed on beer labels as part of its #UpForWhatever ad campaign.

The labels swiftly sparked protests on social media, with users condemning the wording of the slogan, saying that it “perpetuated rape culture”.

The brand issued a statement attributed to Alexander Lambrecht, vice president of Bud Light admitting that the campaign “missed the mark”.

“The Bud Light Up for Whatever campaign, now in its second year, has inspired millions of consumers to engage with our brand in a positive and light-hearted way. In this spirit, we created more than 140 different scroll messages intended to encourage spontaneous fun. It’s clear that this message missed the mark, and we regret it. We would never condone disrespectful or irresponsible behaviour,” the statement said.